The Only Salmon Recipe You'll Ever Need 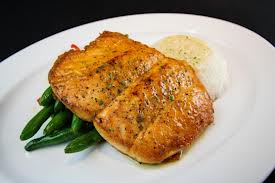 I'm not Catholic, but for Lent I eat fish every Friday.  Why not?  It's on sale everywhere, and we're supposed to eat more fish.  Especially salmon.  The trouble is the only salmon I like is the salmon served at The Rusty Bucket.  Their salmon has kind of an Asian flare.  They used to serve it with mashed potatoes and sauteed vegetables.  Now they serve it with sticky rice, but I like it with mashed potatoes better.  Either way at $14.99 a serving, it's a costly way to get salmon into my diet.  I figured I could learn how to make it at home and save a bundle.  I googled Asian salmon and came up with several recipes.  Experimenting in the kitchen I tweaked the recipes and found exactly what I wanted:  the most delicious salmon I've ever eaten.  Easy to make, and I serve it with mashed potatoes and sauteed vegetables.  Last week I had it with carmelized cabbage.  Yum!

In a shallow dish combine vinegar or lemon juice, soy sauce, and 2 Tbsp. peanut oil.  Coat salmon fillets with marinade and let sit for 15 minutes.  Heat up 1 Tbsp. peanut oil in large skillet over medium heat.  Place salmon fillets in pan and sprinkle with black pepper to taste.  Cook 3-5 minutes per side.  Serve with mashed potatoes and sauteed vegetables.
Posted by Jude at 6:15 AM 1 comment: 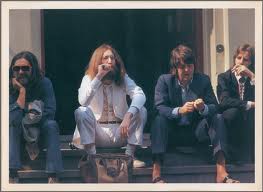 Yesterday was George Harrison's 70th birthday.  The youngest Beatle would have been seventy.  How is that possible!  And recently my son declared "Let It Be" the best Beatles song, which made me wonder....If I were on a deserted island (you know, that notorious deserted island we're all destined for), which Beatles songs would I take with me.  Following are a baker's dozen of my favorites, newest to oldest.  These aren't necessarily my favorites, although they would make any island stay more pleasant.  If you had to pick one Beatles song, which one would you choose?

Email ThisBlogThis!Share to TwitterShare to FacebookShare to Pinterest
Labels: music, the sixties

All Things Must Pass

Here between Valentine's Day and President's Day, I find myself in a rather morbid frame of mind and feel the need to inventory the stars from the television shows of my formative years who have passed.  I'm not sure what prompted this macabre mood: perhaps simple nostalgia, maybe the passing of so many classic television stars last year, or possibly the St. Valentine's Day massacre paper my son wrote.  Whatever the reason, here's my tribute to my small screen idols.

I Love Lucy (1951-1957).  With the passing of Doris Singleton (Carolyn Appleby) only Shirley Mitchell (Marion Strong) and Richard Keith (Little Ricky) are still with us.  William Frawley (Fred Mertz) was the first to check out, collapsing of a heart attack at the age of 79 on March 3, 1966, while walking along Hollywood Boulevard after seeing a movie. Fitting end, given that Frawley acted in over 100 movies.  Vivian Vance (Ethel Mertz) succumbed to breast and bone cancer in 1979 at the age of 70. Desi Arnaz (Ricky Ricardo) was 69 in 1986 when he died of lung cancer.  And three years later when she was 77 everybody's favorite red head died of an acute aorta aneurysm.

Bonanza (1959-1973).  None of the Cartwrights are living.  Dan Blocker (lovable Hoss) was only 43 in 1972 when he died of a pulmonary embolism following gall bladder surgery. Following his heart surgery in 1987 Lorne Greene (Ben) died at the age of 72.  Michael Landon (Little Joe) died of pancreatic cancer in 1991 when he was 54.  Also of pancreatic cancer, Pernell Roberts (Adam) died at the age of 81 just two years ago.

The Andy Griffith Show (1960-1968).  Only Ron Howard (Opie), Betty Lynn (Thelma Lou), Elinor Donahue (Ellie), and Jim Nabors (Gomer), who just last month married his life partner of 38 years, are still living.  Howard McNear (Floyd the barber) was only 63 in 1969 when he died of complications following a stroke.  Francis Bavier (Aunt Bea) died from a heart attack in 1989 when she was 86 years old.  In 1994 when he was 77 Hal Smith (Otis) also died of a heart attack.  Aneta Corsau (Helen) died of cancer in 1995 at the age of 62.  Don Knotts, at the age of 81 in 2006, died of pulmonary and respiratory complications. George Lindsey died at the age of 83 last year following a brief illness. Driving home how old some of us have become, Andy Griffith, a mere 86, died last year of a heart attack.  Fun bit of trivia: Andy Griffith and Marilyn Monroe were both born June 1, 1926.

That Girl (1966-1971). Marlo Thomas (Ann Marie) is still alive; she writes a blog for The Huffington Post and looks much younger than her 75 years.  Dabney Coleman and Bonnie Scott (Leon and Judy) are still with us, as is Bernie Koppell (Jerry), who also played Sigfried on Get Smart, but gone are Lew Parker (Lou, Ann's father) from lung cancer in 1972 at the age of 64, Ted Bessell (Donald Hollinger) from a heart attack at the tender age of 61 in 1996 (just four days before the birth of my son), and Rosemary DeCamp (Helen, Ann's mother) at 90 in 2001--not a bad innings.

R.I.P. and thanks for the memories!

Email ThisBlogThis!Share to TwitterShare to FacebookShare to Pinterest
Labels: movies and tv, music, the sixties 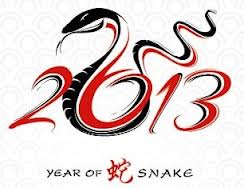 I make a lot of Chinese dishes at home.  I still eat out occasionally, too.  Christmas, for instance.  We always order Chinese take-out for Christmas.  Have done for three Christmases now.  Next Christmas I'm getting Peking Duck.  I can't believe I've never eaten Peking Duck. I might not like it either, but, like cooking a live lobster, it's on my bucket list.  This past year, I added three more Chinese dishes to my repertoire:  pork chow mein (lovely throwback recipe from Woman's Day), pork lo mein (from America's Test Kitchen), and pork fried rice.  I'd found several recipes online for fried rice (chicken, pork, shrimp) and took something from each of them.  The resulting recipe is is really easy and tasty.  You don't need a wok; just a really big skillet will do the trick.

Pork Fried Rice (Four Servings)
I use pearl rice (sushi rice) which is in the Asian section of my local supermarket.  One cup of raw rice makes 3 cups of cooked rice.

In large skillet heat 1 Tbsp. peanut oil over medium heat.  Pour in eggs and add salt and pepper to taste.  Cook until set, about one to three minutes.  Remove; let cool.  Roll up and slice crosswise into thin strips.  Set aside.

Add rice and, tossing frequently, cook until heated through, about 2-4 minutes.

Add pork and egg, and, tossing frequently, and cook until heated through, about 2 minutes.  Serve 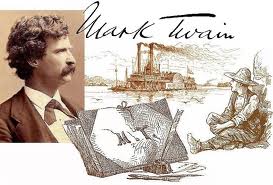 One of the duties of my day job is to write a blog.  Today I posted an entry entitled Why Teach Literature, a subject near and dear to me.  The new Common Core Standards of English call for public schools to increase nonfiction reading, so that by senior year 70% of reading material be nonfiction.  In effect literature is being driven from the high school curriculum.  Read Why Teach Literature for my reasons why this is unacceptable, and let me know what you think.
Posted by Jude at 7:35 AM No comments: 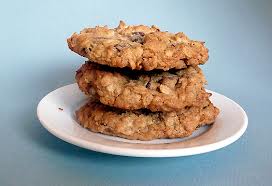 Everybody from Laura Bush to Martha Stewart has a recipe for cowboy cookies, though no one seems sure of the origin of the name.  My guess is their gigantic size and heartiness invokes a strapping cowboy.  I first made these cookies this past Christmas, and they are already a staple of my baking.  The batch I made yesterday is gone already.  Many recipes contain pecans and coconut, which I can't include as my son has a tree nut allergy.  Not to worry, my cookies are still packed with delicious cookie goodness:  butter, sugar, chocolate chips, butterscotch chips, and pretzels.  They also contain a hefty dose of oats, so you can tell yourself you're eating a healthy snack.  And for teenagers this is a great snack: pack a few in their lunches, and they'll stay full through weight lifting and other strenuous after-school athletic endeavors.

Dissolve coffee in the hot water.

Beat butter and both sugars until light and fluffy.  Add egg and egg yolk and beat until well blended.  Add coffee and vanilla.

Preheat oven to 350 degrees.  Using 2 tablespoons of dough for each cookie, roll into balls.  Arrange 2 inches apart and flatten slightly with hand.

Bake until edges are golden brown, about 11 to 13 minutes.  Cool slightly on sheets; then transfer to wire racks to cool completely.

One of my favorite Christmas specials is a radio drama.  Lum and Abner's traditional Christmas story, which aired every year from 1933 to 1954, is set in Pine Ridge, Arkansas, but reflects Bethlehem's nativity story.  After paying their taxes in the county seat, a young couple is forced to take up lodging in an old abandoned barn, where the wife has gone into labor.  Lum, Abner, and Grandpappy Spears, armed with blankets, an oil heater, and a box of groceries, are trudging through the snow on Christmas night to provide comfort and sustenance to the couple.  On their Christmas journey, the three old men contemplate the joy of helping others, the passage of time, and the bittersweet circle of life.

Jude
Writer. Story lover. I love stories in all their forms and am especially fond of children's literature; it's been my pleasure to lead my two children to books through the years. I have two degrees in English literature; I've taught writing, worked in several libraries, and am an award-winning author of plays and articles. Email me at jude8196 at gmail dot com.